A Brief History of Wood Routers 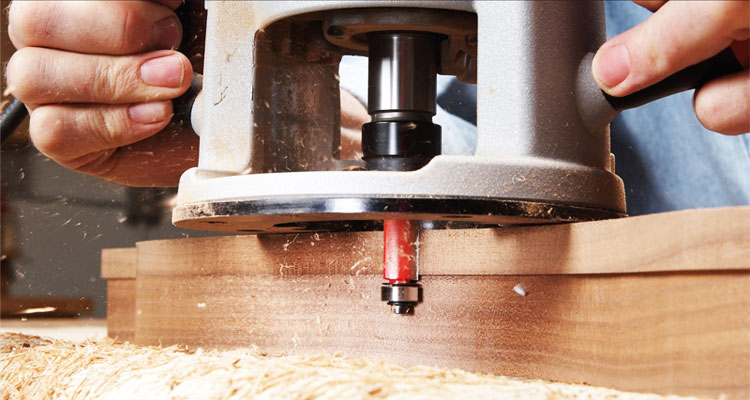 The router is a power tool used for milling or boring a certain area of hard parts such as wood or plastic; this hand tool is widely used in carpentry. Beyond its etymological origin, before there were electric routers, there was a handheld version that was used to make patterns and wooden stairs. Today, it is being used for very specific millwork.

The first devices were used rotationally driven by human pedaling. The first foot-driven milling machine was manufactured by WF & John Barnes Co. Illinois (USA) in 1872. The machines of this type continued to be used throughout the century until well into the years of 1930s, mainly in rural areas where electricity had not reached yet.

The device called Foot Power Barnes Former was used to make decorative borders on media, scrolls and panels regular and irregular wooden molds, reaching 7/8 inches deep. Depending on the skill, strength and endurance, the operator could reach speeds of 2000-2500 rpm. The advantage of this device compared to current wood routers powered by electric motors is that the direction of rotation of the tool could be changed according to the direction of pedaling, obtaining better surface finishes on the wood more quickly and accurately.


There is still discussion of who invented the first portable electric router, if it was Carter Company or R Kelley Electric Machine Co. The truth is that there was evidence that the latter, in 1905, it was Kelley portable router.

Then came the Carter router, widely sold during the period of the First World War (1914-1918), which already incorporated a variety of equipment in terms of power and weight. It was called Wonder Tool as it was smaller than Kelley but more powerful with 1 ½ HP.

In 1929, he bought the Stanley Electric Tools line and continued manufacturing Carter routers until the early 80s, when the company was purchased by Bosch Power Tool Corporation.

Although in the years mentioned electric routers were booming in 1915 and Rudy Oscar Onsrud invented a woodworking router running with the principle of an air turbine, then popularized with the name Onsruter. The device operated with compressed air and a modified cutter at one end of a spindle, reaching 30,000 rpm rotation. Unlike conventional milling machine working no more than 3,000 rpm, this device did not allow burning wood and grooves and bevels generate different types. In 1946 Onsrud model was adapted and made the Unit Electric Tool Co., a company that two years later was bought by Porter-Cable. This company adapted the model Onsrud and made it fixed base routers to compete with the group of Stanley routers.

While fixed base routers are widely developed in the US, in 1949 the German company Elu introduced on the market the first routers with variable immersion depth. Elu was acquired by Black & Decker who today is responsible for selling this variant of routers. These mills incorporated the idea of ​​variable speed feature necessary to work with different types of strawberry, woods and cuts.

Wood router is the advanced tool that helps the woodworkers in making their work easier and achieving the highest perfection in their work as well. Technology has made it easier for you to turn the things upside down and making things effective and workable on the extreme creative conditions as well. In order to make sure that you will do the miracles in your wood carving, selecting a perfect wood router is important for you. It is important for you that you choose the perfect tool that will help you in your work, and for the best selection, you can consider the following tips models.

Another great option for the wood router is the DEWALT DW618B3. It has three interchangeable bases. The DEWALT DW618B3 has a D-handle base. The speed of this machine varies with a horsepower of 2-1/4 which is enough for cutting through hardwoods with easily.

The Festool 574342 can cut through any sort of woodworking which makes this machine handy and useful for the users. It has a smooth operating router. The quality, power, and precision of this equipment were given 4, 4.5 and 5 stars respectively.

In your search for the ultimate ideal for fixed base or plunge base then here, you have Dewalt DWP611PK come up with 1.25 horsepower strong enough to work on the hard surface and give you the ultimate grip on your subject. It has all the features that you are looking for in your next tool from the power motor to the adjustable speed of the motor to control the work and performance of the machine. In addition to that, Dewalt DWP611PK come up with a base LED lights that are useful to light up the working base and gives you the details of work that you are doing with accuracy, it is the major help provided by the tool.

In the fixed base routers to handle all your difficult jobs with ease here, you have Porter Cable 7518 that comes up with some of the extensive features letting you have the perfect results all the time. The 15amp power motor and variable speed adjustment let you have the variation and creativity in your work. It takes a soft start and durable to work due to the hard metal body, but it is recommended to work in breaks with it as for long term work it can cause trouble.

Black & Decker RP250 is a variable speed plunge base router that lets you have a decorative cutting from the center of the surface. The 10amp motor gives you the ultimate power that is ideal to work great with the tool. Along with that is comes up with some of the amazing gadgets that make the package ideal and lets you have the fine results.

Should You Get Samsung Galaxy Tab S3?